One Year After His Arrest, Chandrashekhar Azad Is A Prisoner Of The Yogi Adityanath Government

Posted by kracktivist on June 9, 2018
Posted in: Political Prisoner, Uncategorized. Leave a comment 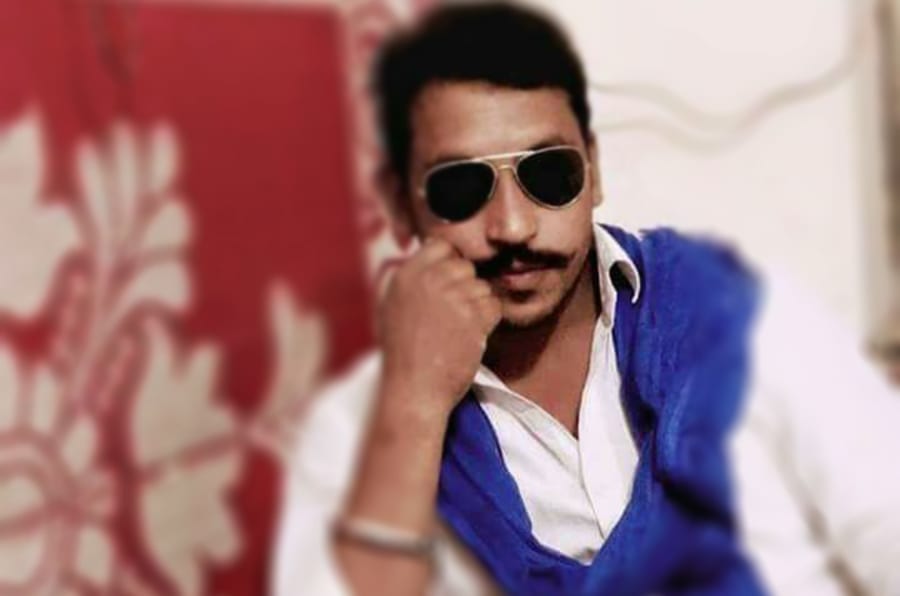 June 8, 2018 marks one year since Chandrashekhar Azad, a rising Dalit leader in Uttar Pradesh, was arrested and imprisoned by the Bharatiya Janata Party (BJP) state government.

Azad was incarcerated after a month-long cycle of caste violence had claimed the lives of two men, a Dalit and a Rajput, and left dozens injured in and around Shabbirpur village in Saharanpur district, last year.

The 31-year-old was held on several serious charges including rioting, attempt to murder, unlawful assembly and looting, but he was granted bail by the Allahabad High Court on November 2.

The same day, the Yogi Adityanath government concluded that Azad’s release would threaten public order and national security, and hit him with preventive detention under the National Security Act, 1980.

Get top stories and blog posts emailed to me each day. Newsletters may offer personalized content or advertisements. Learn more

The 31-year-old lawyer, who also goes by the name Ravan, has been languishing in the Saharanpur district jail, without access to bail or a trial.

Over the course of the past year, at least four Dalits, three in connection with the caste violence in Saharanpur, and another Bhim army leader, have been placed under the NSA. Preventive detention has not been invoked against any member of the upper-caste Rajput (Thakur) community in connection with violence.

‘He doesn’t know how to get out’

Vinay Ratan Singh, who was lodged at the Saharanpur district jail until last week, told HuffPost India that Azad was suffering from a stomach and a throat infection, and he was in acute pain over a bad tooth.

“His tooth hurts him a lot. He is in urgent need of surgery but all he is getting are some medicines from the shop inside the jail,” he said.

Singh, who was also arrested in connection with the caste violence in Saharanpur, was released on bail, last week. He is the national president of the Bhim Army, an organization founded by Azad in 2014 to work for the emancipation of Dalits.

Singh, who spoke with Azad in prison, said the Bhim army chief was staying in a cell by himself, in an area the inmates call “tanahi,” but he was holding out hope for his release.

“He says, ‘If I haven’t done anything then how long can they keep me here. They will have to release me eventually,'” said Singh. “We have known each other a long time. I believe that this experience is only making him stronger.”

In the past four years, while the Bhim Army was setting up schools to educate children about the Dalit movement, Azad had gradually ingratiated himself in the community. Young Dalit couples in UP and Uttarakhand are even putting his photograph in their wedding cards.

Even with his growing clout in western UP, Azad had not run for political office. Until his arrest, last year, his Army appeared to be focused on social activities. Ahead of the crucial by-poll in Kairana, last month, Azad asked the “Bahujan Samaj” to vote for Tabassum Hasan, the candidate of the united opposition, against the BJP.

Those who have visited him in jail say that Azad spends a great deal of time reading books and talking about the state of the country. He has only left prison when he was rushed to a hospital in Lucknow and another one in Meerut, in October and November respectively, after suffering from an acute stomach infection. His supporters claim that he was suffering from typhoid in prison, last year, but he was not given any treatment. They also claimed that he was beaten up by other inmates, but the district administration said the allegation was baseless.

Pradeep Narwal, a Dalit rights activist, said, “Even from behind bars, he wants to know how the schools are doing.”

Narwal said that he used to meet Azad frequently in the Saharanpur district jail, but the authorities had denied him entry after the Bhim army chief had carried out a hunger strike following the Supreme Court’s order barring the immediate arrest of persons for alleged harassment of Scheduled Castes and Scheduled Tribes (SC/STs).

Recalling his meeting with Azad in March, Narwal said that while the Bhim army chief continued talking about the Dalit movement, but the prolonged confinement had taken its toll. “There is mental oppression. He doesn’t know when he will get out. He doesn’t know how to get out,” he said.

As Indian law on preventive detention stands today, Azad can be detained without trial or bail for one year. The 31-year-old, until November 2018, remains at the mercy of the state. At the end of the year, the BJP government has the power to issue another order of preventive detention.

The draconian law, enacted by the Indira Gandhi government, allows the state to preventively detain an Indian citizen if such person is deemed to be a threat to the defense of India, public order, the relations of India with foreign powers, the security of India and to the maintenance of essential supplies and services.

Human rights activists have long blamed the vague wording of the Act for legitimizing its misuse.

If the period of detention is more than three months, the NSA allows for a detained person to make a representation before an Advisory Board of three high court judges or persons qualified to be high court judges. It is worth pointing out that a person detained for less than three months does not even have the option of making such a representation.

India is one of the few remaining countries to use preventive detention. The European Court of Human Rights has long held such laws as illegal. In India, however, preventive detention finds place not just in the NSA, but several other laws like the Unlawful Activities Prevention Act (UAPA), 1967, the Jammu and Kashmir Public Safety Act, 1978, the Chhattisgarh Special Public Security Act, 2005, amongst others.

Not only is preventive detention invoked in crimes that can easily be prosecuted under other Indian laws, it has long been a tool for governments to crush dissent.

Abhirr VP, a senior campaigner with Amnesty International India, pointed to Azad, farmers’ rights activist Akhil Gogoi in Assam, who was detained under the NSA, and Kamran Yousuf, a Kashmiri journalist, who was booked under the UAPA.

“You can see a pattern emerging. The law is being used against activists who are expressing opinions contrary to that of the government,” he said.

The law is being used against activists who are expressing opinions contrary to that of the government.

The UP government on November 2 placed Azad under preventive detention for a period of three months. Following his representation to the advisory board in December, not only was Azad’s detention upheld, it was extended by another three months to May 2.

On May 2, the state government extended Azad’s detention till August 2.

Gonzalves noted that the six FIRs (First Information Reports) against Azad were “vague,” he had not been in possession of a weapon, and his defense team had found a video that showed the Superintendent of Police in Saharanpur calling on the Bhim Army chief to help control the crowd.

“They have absolutely nothing,” he said.

In February, Azad filed a writ petition in the Allahabad High Court, challenging the NSA order. In April, it was rejected by a two-judge bench comprising justices Ramesh Sinha and Dinesh Kumar Singh.

Amnesty International’s Abhirr VP noted how odd it was for the Allahabad High Court to have upheld the preventive detention imposed on Azad, just five months after having described the criminal charges against him as “politically motivated.”

“The Allahabad High Court’s ruling raises disturbing questions,” he said. “It is the duty of the court to guarantee a fair trail to all persons and to ensure the criminal justice system is respected.”

It is the duty of the court to guarantee a fair trail to all persons and to ensure the criminal justice system is respected.

While it could be argued that even those detained under the NSA have recourse to the writ jurisdiction of the courts, human rights activists point out that not everyone has the means to pursue it.

In other words, not everyone is a prominent activist like Azad, who has the backing of his own supporters as well as sections of civil society and the public.

As one human rights activist put it, “What happens to you if you’re just an ordinary goon who has been slapped with the NSA?”

The UP government has said that the NSA would be used against the “sugarcane and food mafia” and to crackdown on theft of electricity.

In August, last year, the state government extended the NSA to the crimes of cow smuggling and cow slaughter, even though these are covered under the UP Cow Slaughter Act, the Prevention of Cruelty to Animals Act.

At least three Muslim men, accused of cow slaughter, have been arrested under the NSA.

Legal expert argue that nothing justifies invoking preventive detention under the NSA for crimes related to cow slaughter.

Given that it is the Dalit and Muslim communities who are largely involved in the skinning, tanning and transporting of cattle, Gonsalves, the human rights lawyer, said, “This is totally anti-Dalit and anti-Muslim.”

This is totally anti-Dalit and anti-Muslim.

Azad’s prolonged detention, human rights activists believe, has revealed how the BJP government is using the NSA to target Dalits in the state.

Nakul Singh Sawhney, a documentary filmmaker who has worked extensively on caste and communal issues in western UP, asked why the NSA was not extended to the Shri Rajput Karni Sena, on organization that led violent protests to prevent the release of Sanjay Leela Bhasali’s Padmaavat.

“Why not the Karni Sena and why Chandrashekar Azad?,” he said.

Why not the Karni Sena and why Chandrashekar Azad?

Azad was not the only Dalit slapped with NSA following the caste violence in Saharanpur, last year.

Two Dalit men, Sonu Pradhan, the village head of Shabbirpur, and Shiv Kumar, another resident, have also been hit with preventive detention.

In contrast, a fact-finding investigation by the National Campaign for Dalit Human Rights (NCDHR) and the Commonwealth Human Rights Initiative (CHRI) has found that only three out of the 40 persons from the Rajput community, who were accused by Dalits in connection with the Shabbirpur violence, were arrested. A total of nine Rajputs have been arrested, according to the study.

The fact finding team also found that not all relevant sections of the (Prevention of Atrocities) Act, 1989 (SC/ST Act), which protects Scheduled Castes and Tribes, were not invoked in the FIRs.

In addition to the Dalit men who are in preventive detention in connection with the caste violence from last year, the UP government has also invoked the NSA against Upkar Bawara, Bheem Army’s Muzaffarnagar district president, even though he had already been jailed in connection with the violence that had erupted in the district on April 2, the day of the Bharat Bandh, over the Supreme Court’s ruling on the SC/ST Act.

Apurva Kumar, the younger sister of Shiv Kumar, the Shabbirpur village resident who is being held under the NSA, said her family is living in dread of receiving letters.

“When the time comes for the NSA to end, we get another letter saying another three months, and then another letter. We have tried everything to help him. We don’t know what to do anymore,” she said