Jailed for years: Why India needs a right to compensation for wrongful arrests & detention

The case of Assam’s Madhubala Mondal is not rare and adds into a series of cases of unlawful arrests and detention, which have caused individuals to spend several years in jail without being guilty in India.

Mondal was 59-years-old and wrongfully detained for three years in Assam as a result of “mistaken” identity by the police. It has again highlighted the need to bring accountability in our criminal justice system.

Recent judgments acknowledge that individuals have often been falsely framed and prosecuted for offences against the state, particularly those related to terror and national security.

Under the International Covenant on Civil and Political Rights (ICCPR), signatories are required to take steps to ensure the right to compensation for wrongful imprisonment and detention. While India had expressed reservations while ratifying the ICCPR that the Indian legal system does not recognise the right to compensation for victims of unlawful arrest and detention, the jurisprudence created by the Supreme Court of India has made this reservation redundant.

In a number of judgments, the Supreme Court has recognised granting of compensation as a necessary public law remedy for violations of fundamental rights, including wrongful incarceration and arrests. For instance, the Supreme Court, last year, provided a compensation of 50 lakhs to former ISRO scientist Nambi Narayanan, 24 years after he was illegally detained on the charge of leaking official secrets to a spy racket.

The fact that the payment of compensation was ordered 24 years after the wrongful arrest is a serious reminder of the need to correct wrongs caused by unlawful arrests in a timely manner and to preserve liberty. This calls for statutory recognition of the right to compensation in cases of wrongful arrests and imprisonment, which the victims of such accusations can avail without waiting for another several years of litigation before the courts.

Unlawful arrests and detention not only cause loss of years, but can also create social stigma and ostracisation even after being released. This is evident from powerful narrative accounts by individuals who have been victims of false prosecutions. For instance, in her book Prisoner No. 100: An Account of My Nights and Days in an Indian Prison, political activist Anjum Zamarud Habib (from Kashmir) recounts her experiences of having spent five years in jail before being released by the Delhi High Court. Anjum writes in her book, “I am a free person today but the wounds and scars that jail has inflicted on me are not only difficult, but impossible to heal”. Framed As a Terrorist: My 14-Year Struggle to Prove My Innocence is another harrowing narrative of a young Indian Muslim man, Mohammad Aamir Khan, who was kidnapped by the police, falsely accused of being a terrorist, framed, and kept in jail for almost 14 years. Providing compensation to such victims of wrongful arrests, detention and prosecution is the least that the state could do as reparations for the wrong done.

Countries such as the United States, United Kingdom, Australia, Canada, Germany, etc. have enacted a statutory right to compensation, but it is limited to wrongful conviction by virtue of a final order, after all avenues of appeal have been exhausted and a new fact surfaces, which then proves conclusively that the convicted person was factually innocent. In its 277th report titled “Wrongful Prosecution (Miscarriage of Justice): Legal Remedies” (August 2018), the Law Commission of India has rightly pointed that the practices of Western countries would be inadequate to address the systemic shortcomings of the criminal justice system in India, where individuals have spent several years in imprisonment even prior to a conviction.

The Law Commission has suggested the standard of ‘wrongful prosecution’ be applied in India. This standard will be applicable to cases where the police or prosecution maliciously, falsely or negligently investigated or prosecuted a person who was found not guilty of the crime. While stating that India must fulfil its international commitments, the Commission recommended certain specific amendments in the Code of Criminal Procedure (CrPC), 1973 in order to incorporate the provisions for compensation. The Commission even presented a draft amendment bill for the CrPC. However, Parliament has not paid any heed to the observations and recommendations of the Law Commission to date.

Moreover, as a result of lack of financial resources and knowledge about Supreme Court judgments, many individuals may not even think of directly approaching the Supreme Court to seek compensation. A statutory right to compensation will provide a legal remedy to the citizens and will subsequently make the state officials, in particular, the police, institutionally liable.

The author is an LLM postgraduate from Harvard Law School.

Jailed for years: Why India needs a right to compensation for wrongful arrests & detention

First they came for the artists but I didn’t say anything because I wasn’t an artist . . . and because the Saudi government was buying U.S. weapons and selling the United States oil.

Should that be the approach the United States takes to the world?

A Saudi Arabian court has sentenced a poet, artist, and curator of shows in Venice and Jeddah to death for apostasy — specifically for having allegedly cursed God, Mohamed, and Saudi Arabia.

So a Saudi Arabian court has sentenced him to be beheaded.

To help prevent this outrage, please add your name below and then ask others to do the same:

To help prevent this outrage, please click here and then forward this email to everyone you can.

In a recent poll in Saudi Arabia, 92% of respondents reportedly said that ISIS “conforms to the values of Islam and Islamic law.” The Saudi “justice” system is based on Sharia Islamic law. Its judges are Wahhabi and believe that blasphemy and apostasy must be punished with death.

Ashraf Fayadh has denied the charges against him and says his accuser lied to the religious police following a dispute with him. The truth of the matter may be unknowable and is certainly irrelevant.

Beheading a man for free speech is intolerable.

We cannot allow it. 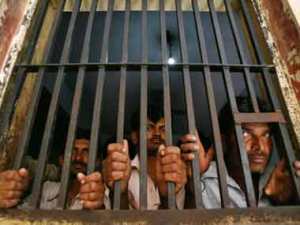 DUBAI: About 1,000 members of Saudi Arabia’s Shiite minority gathered at a mosque today to demand the release of activists on death row, including one aged 17 when he was arrested, a resident said.

He said the prayers and sermons at Imam Hussein Mosque in the Eastern Province town of Awamiya drew Shiites from nearby Qatif and the Al-Ahsa region.

“They gathered to demand their freedom,” said the resident who asked for anonymity.

Their call came as the family of one Shiite activist, sentenced to death after protesting, voiced concern over his fate and a rights group warned of his imminent execution.

The sentence against Ali al-Nimr, only 17 when he was arrested in February 2012, has drawn international condemnation over his young age and allegations he was tortured.

Ali al-Nimr’s uncle told AFP on Friday his family fears “the government is serious, very serious” about carrying out the sentence.

Jaffar al-Nimr said his nephew reported that he had undergone a medical check when his family last spoke to him two weeks ago.

Amnesty International warned Thursday that Ali al-Nimr was among more than 50 people, including other Shiite activists, at increased risk of soon being put to death in a single day.

His mother and the mothers of other detainees implored King Salman for clemency after learning of preparations possibly associated with impending executions, the London-based rights group said.

Ali al-Nimr’s case has provoked a call for clemency from France, while the United States expressed “deep concern”.

Activists say Ali al-Nimr is one of three Shiite protesters who were minors at the time of their arrest and have been sentenced to death. They have exhausted all appeals.

“International law prohibits the use of the death penalty against anyone under the age of 18,” Amnesty said.