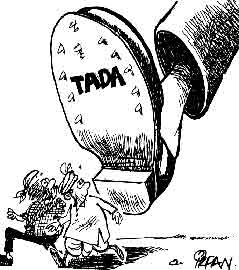 It was expected then that TADA could curb the menace in a short term and the life of the act was stipulated at two years. The police were given enhanced powers for detention of suspects and the Act shifted the burden of proof on the accused. But within a few years, the chorus of dissent began to swell amid allegations of misuse of TADA, which many believed ate into foundations of democracy in the country.

In 1985, the Terrorist and Disruptive Activities (Prevention) Act (TADA) was introduced, and used to suppress anyone who raised a voice against the Indian State’s actions, specifically in Punjab.

The Act gave wide powers to law enforcement agencies for dealing with so called terrorists, and socially disruptive activities in the following ways:

• An accused person could be detained up to 1 year.
• Confessions made to police officers were admissible as evidence in the court of law, with the burden of proof being on the accused to prove his, or her, innocence.
• Secret courts were set up exclusively to hear the cases, and deliver judgments, pertaining to the persons accused under this Act.
• A person could be detained under this act, with no evidence required, on the mere suspicion that an individual may have performed an act not in the national interest.

TADA effectively gave Police the power to accuse anyone of being an enemy of the state, without need of any evidence. A government who puts its citizens first would not grant such powers, even to a police force with an exemplary human rights record.

In India, where the police are known for their corruption, the outcome of TADA was predictable and brutal, yet politicians enthusiastically endorsed it. In the decade that TADA was in force, the Punjab Police imprisoned, tortured, and used blackmail to illicit money from, victims, and their families. The fact that their Police actions could not be questioned under TADA, further emboldened them to rape, torture, murder, and commit other atrocities against, large numbers of Sikhs in the Punjab.

The Act was scrapped in 1995, but many Sikhs charged under the TADA still remain in prison today.

Of these, 18,708 had no charges being framed against them.

Barely 4 per cent of persons tried under the Act were found guilty.

The high profile catch was Sanjay Dutt who was booked under TADA for his alleged role in the 1993 Mumbai blasts case. The validity of TADA was extended in 1989, 1991 and 1993. When the act was due to expire in May 23, 1995, then Home Minister S.B. Chavan held meetings with Opposition leaders and chief ministers in a bid to mobilise support. But Congress had to contend with fierce opposition from within its ranks. West Bengal MP Mamata Banerjee held a day-long dharna in Parliament threatening to resign on the issue.

Two cabinet ministers, Ghulam Nabi Azad and C.K. Jaffer Sharief, declared they would quit if the law was not allowed to lapse. Courtesy the adverse publicity, the Congress government allowed it to lapse in 1995. But the law found an afterlife in later years, with varying intensity, in form of The Prevention of Terrorism Act (POTA), 2002, and the Unlawful Activities (Prevention) Act (UAPA) passed .

Examples are aplenty to be seen by anyone.

According a NHRC report, Gujarat with no militant activity at all once accounted for as many as 19000 of a total of 65000 TADA cases alone.

In other states like Punjab, Maharashtra, Kashmir and Andhra Pradesh, tens of thousands of people were lying without even once appearing before the court of law.